Our range of services comprises translating and interpreting into all languages, terminology management, language training courses for business purposes, drawing up, proofing and/or revising Operating Manuals (with respect to the applicable provisions of the EU Machine Directive, terminology, etc.), localising software and websites, multilingual DTP and graphic editing.
Our market position: A highly appreciated and recognised partner for our many customers.
Our cornerstones: Flexibility, quality and the continuity of our entire team.
Our aspiration: associating a face with every customer through long-term partnerships.
Our philosophy: We believe that only companies that truly know their customers also feel fully committed to them. 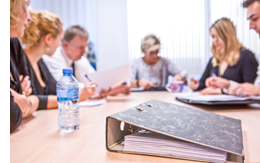 Quality has always been key at DOCTEC.
We have always been convinced of our quality. To have this officially confirmed, in 2004 we assigned TÜV to audit us for ISO 9001 certification.

DOCTEC received this certification in 2004. During that year, we adjusted and improved our system again. And annual monitoring and recertification audits have confirmed our quality year in, year out.

DOCTEC's translation roots date back to 1981 when MIC, a technical translation agency focussing on eastern European and Asian languages, was launched. This was the start of the highly successful development of MIC, mainly in Germany and the Netherlands.

The next step did not really come as a surprise. MIC and DOCTEC joined forces under one roof and the MIC-DOCTEC group was established. Both companies, which had been independent until then but had started sharing an office building, could now benefit even more from each other's competencies and the synergies that this yielded.

As the activities of MIC and DOCTEC came to be ever more closely aligned, and MIC's managing director decided to start enjoying his much deserved retirement, the time had come for a more definite merger of both companies. And so in 2007, MIC fully merged into DOCTEC B.V.